US investigators believe the pilot of a Cessna Citation V became incapacitated before the plane entered a tight spiral descent from 31,000ft and disintegrated on impact with terrain in the chain of Oregon’s Mutton Mountains.

The pilot did not have a type rating on the business jet – having stopped training before it was completed – and the crash likely happened the first time he had flown it solo.

Although a private pilot, with experience in a number of aircraft types, including jets, he had “struggled a lot” in high workload environments and had “difficulty” operate the plane’s recently installed avionics suite, according to the National Transportation Safety Board. .

Air traffic control records indicate communication difficulties with the pilot after he took off from Troutdale Airport in Portland.

Approach and tower controllers had to make repeated attempts to contact him after he failed to respond to certain instructions, and he also maneuvered the jet onto an incorrect heading after clearing a waypoint. journey. An instruction to turn right was correctly read back, but the airplane turned left.

When control was transferred to Seattle Center, the controller immediately issued a low-altitude alert warning, as the aircraft flew south of the summit of Mount Hood. After the pilot climbed, he was transferred to a new radio frequency – initially replaying the wrong one – and was later cleared to 37,000ft.

Some 4 minutes later, the aircraft had reached 27,000 feet when it began to drift to the right, and the pilot did not respond to controller alerts. It continued to climb for about 2 minutes, reaching 31,000 feet before entering a spiraling right turn. The airplane descended in a straight bank of 60-70° at a speed of 2,500-5,000 feet/min before striking the ground.

While the pilot had previously indicated that he preferred to fly the aircraft by hand and the descent was consistent with the autopilot not being used, analysis of the flight path showed that the pilot “probably wasn’t handling orders” at the time, according to the investigation. . 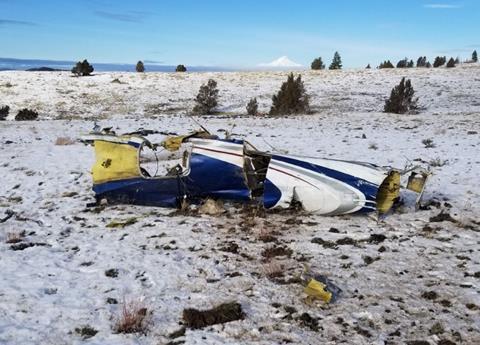 Evidence from the investigation shows consistency with the pilot’s incapacitation. Examination of the oxygen system suggested that it did not deploy, and the NTSB says, “The reason for [the] incapacity could not be determined.

Review of the pilot’s medical history revealed conditions and medications that the pilot had not reported to the United States FAA.

He suffered from a psychiatric condition, and regular medications taken in the year before the accident included alprazolam – which the FAA classifies as a “do not fly” drug – and sertraline, which cannot be taken without the FAA clearance.

“None of the pilot’s known medical conditions or medications would have directly caused incapacitation,” the inquest said. “But the pilot may have had an undiagnosed illness or an acute event that would have disabled him.”

Little useful information could be obtained during the autopsy of the pilot. The inquest into the crash on January 9 last year points out that his age – 72 – and other factors including high blood pressure and hypertension put him at risk such as a heart attack.